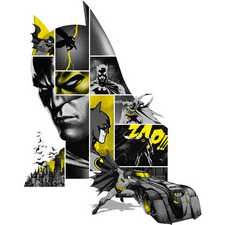 Official figure of your choice between Batman Batarang or Grappling, Bane, Catwoman, Joker or Two-Face in PVC which measures about 8 centimeters high. It comes from the Mini Egg Attack collection. The manufacturer is Beast Kingdom.

The Dark Knight DC Comics film trilogy is now cult and honors the dark knight of Gotham City. Thus, the Mini Egg Attack collection offers several small figurines incorporating the flagship characters present in the various films. You have the choice between two different Batman, the first is armed with the Bat-Grappin while the other version is about to launch a Batarang. Otherwise, we find the bad guys Bane, Joker or Double-Face and finally, the one that is often between the two, the beautiful and sexy Catwoman.